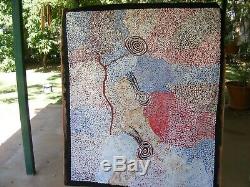 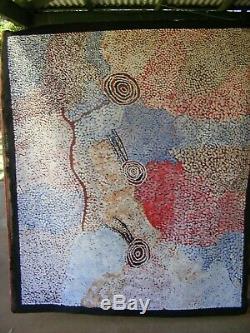 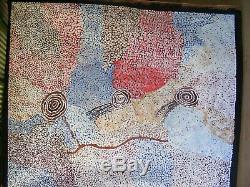 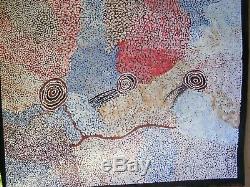 Pitjantjatjara artist Bill Whiskey Tjapaltjarri (1920- 2008) was born at Pirupa Akla, country located near the Olgas and west of Ayers Rock. By an early age, most of Bill Whiskeys family had passed away, and many of his people had begun moving towards Haasts Bluff mission, about 250 kms away. Bill Whiskey joined a group who made that journey, but with some of the others, decided not to stay as they were frightened when they saw Europeans for the first time. Their fear came from the belief that these white-skinned people were Mamu, or bad spirit people, and so the group continued to travel on. They eventually arrived near Areyonga where a white missionary Pastor called Patupirri had established a camp. It was here that Whiskey and the others first tasted European food. Whiskey tells how they would throw this strange food behind their backs as they didnt like its taste. Whiskey spent some time here before moving back to the Lutheran mission at Haasts Bluff. While living at Haasts Bluff, Bill came to be called Whiskery, owing to his long bushy beard, and the name eventually evolved into Whiskey. Bill Whiskey Tjapaltjarri was a Ngangkari, or traditional healer in his community, and people came from afar to be treated by him. Whiskey began painting around 2004 the main images in his works are the Rockholes near Pirupa, to the west of Ayers Rock, and the story of his journeys to Areyonga and Haasts Bluff. Although he began painting only in the last four years of his life, Bill Whiskeys paintings quickly become among the most sought after Aboriginal art works in Australia and overseas. Aboriginal art status Highly collectable artist.