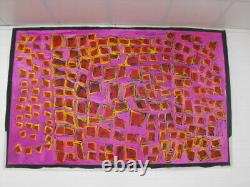 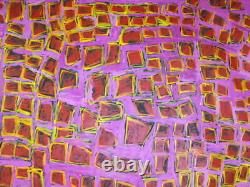 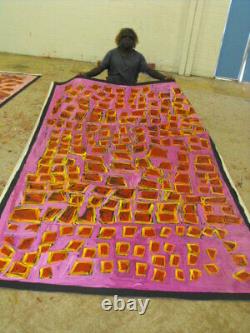 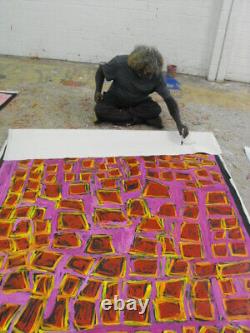 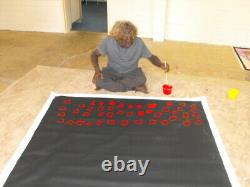 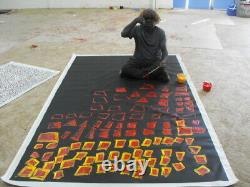 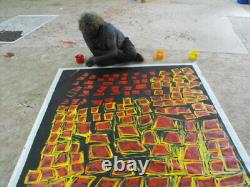 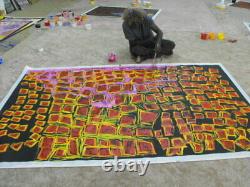 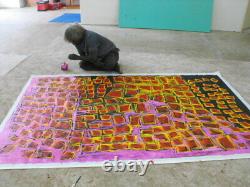 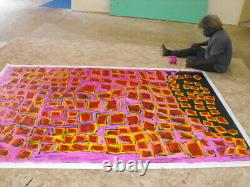 Painting is accompanied by 16 works in progress photographs and 1 photo of bob holding and signing his painting. Painting also comes with COA. Bob was born at Papunya and moved with his family to Tjukurla at the time of the homelands movement in the late 1980s. Bob's bold and energetic paintings have put Bob amongst some of the most sought-after emerging artists in the contemporary indigenous art world. His unique and powerful style represents country in a wild and imaginative exploration of colour and form.

Bob enjoys telling the stories from his fathers country of Patjarr and his mother's country of Kulkurta. Bob Gibson Tjungurrayi was born in 1974 and is to son of renowned artist Mary Gibson.

Bob is from Papunya, 240kms northwest of Alice Springs in the Northern Territory. Bob moved to Tjukurla in the 1980s during the homelands movement and has been painting since about 2007.

Bob paints his dreaming Walatu which represents his sacred country. Bobs energetic paintings incorporate both bright colours and whimsical imagery, highlighting a beautiful innocence in his works. Bob is therefore able to portray his country in an imaginative an unique way. George [Hairbrush] Tjungurrayi was born near Kiwirrkurra in the Gibson Desert, Western Australia.

His homeland is claypan type country in which soakage water is used by the travelling men and the small flesh mungilypa shrub that grows profusely in this region. He came in from the desert via Mount Doreen and Yuendumu. In the mid 1970s both George and his older brother Willy, also an established Pintupi artist, commenced their painting careers as apprentices for Papunya Tula Artists. George has painted at various locations, including Mt Liebig (Yamunturrngu) and Kintore (Walungurru), and at the Yayayi and Waruwiya outstations, working alongside Joseph Jurra Tjapatjarri and Ray James Tjangala. His subject matter references his ancestral country, its Tingari Stories and the various sites surrounding the area such as Wala, Kiwirrkura, Lake Mackay, Kulkuta, Karku, Ngaluwinyamana and Kilpinya, north-west of Kintore. Originally his artwork employed the typical Western Desert image bound to subtle hues, however his art style has evolved and re-shaped to include the brighter hues which dominates his canvases. George Tjungarrayi has been painting for. 1990, 1996: Araluen Arts Centre, Alice Springs.