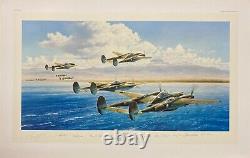 A POWERFUL EDITION DEPICTING'OPERATION VENGEANCE' THE FAMOUS MISSION TO SHOOT DOWN ADMIRAL YAMAMOTO IN APRIL 1943, SIGNED BY ICONIC ACES WHO FLEW ON THE RAID. Doug Canning breaks radio silence to call the sighting of Admiral Yamamoto's flight over the pacific island of Bourganville, 18 April 1943. Each print is signed by EIGHT of the P-38 Lightning pilots who flew one of the most successful intercept missions of WWII. He flew 457 combat missions in the Pacific and devised and led Operation Vengeance the famous raid to shoot down Admiral Yamamoto in April 1943.

He retired as a triple Ace with 15 victories, including 4 MiGs in Korea. He was credited with the destruction of Admiral Yamamoto's plane on the famous April 1943 mission, finishing the war as an Ace with 5 victories.

The Pilots who have autographed this print represent iconic P-38 Pilots who took part in this legendary mission. Sadly all have now passed into history. A great opportunity to acquire this collector's piece. Matted & framed pieces are'flat packed' in substantial packaging.

YOUR PIECE OF MIND: As a reputable company, if any issues do arise we don't expect our customers to deal with it. Please note: The signatures on our pieces are not reproductions, they are original autographs, hand-signed by the veterans involved. This item is in the category "Art\Art Prints". The seller is "aceshighgallery" and is located in this country: US. This item can be shipped worldwide.