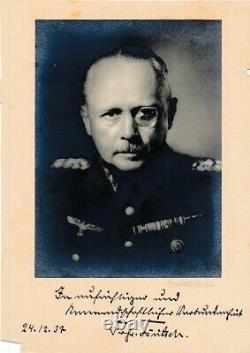 SUPER RARE Historical 6.25X8.75 vintage photograph on a matte signed in the lower matte in German in 1937 by Werner von Fritsch. A clipped lower left corner and indention to the right edge from a 3-ring binder, otherwise mint. He was Commander-in-Chief of the German Army from February 1934 until February 1938, when he was forced to resign after he was falsely accused of being homosexual. His ousting was a major step in Adolf Hitler's establishment of tighter control over the armed forces. Just over a year later, before the outbreak of World War II, Fritsch was recalled as Colonel-in-chief of the 12th Artillery Regiment.

He died in battle in Poland early in the war. This item is in the category "Collectibles\Autographs\Historical". The seller is "toddmuellerautographs" and is located in this country: US. This item can be shipped worldwide.