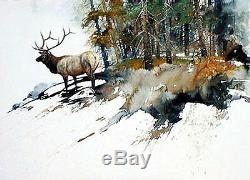 High Country Elk by Morten Solberg. Size 18 x 24 Inch Image Limited Edition of 500 Signed and Numbered Prints. This is beautiful wildlife print made form one Mort Solberg's great original paintings. This is an image of a.

Bull elk standing in the high. After a new snow fall. It is a great image and beautiful print.

It is brand new and it is vibrate, crisp, clear and just as the artist intended it to be. When you get it in you hands it will indeed be everything you hoped it would be.

To bad the pic on the net just does not do it justice. Solberg is a versatile artist in all mediums. He paints in Oil, Acrylic, and Specializes in Watercolor. His techniques range from photo-realism to total abstraction. There was never a time that he can remember wanting to be anything other than an artist. Years of pursuing his craft via design studios and commercial art brought Mort to the West. While living in Southern California's Orange County, he firmly established himself in the art world with memberships in the American Watercolor Society, the National Watercolor Society (First Vice President), the Society of Animal Artists, Wildlife Artists of the World and Knickerbocker Artists.

Mort is a lifetime Master artists in the Society Of Master Impressionists. And a signature member of the American Society of Marine Artists. Mort Attended The Cleveland Institute Of Art while in Cleveland. After mobving to California in 1968, He shed his commercial ties and concentrated on fine art and has been painting full time since 1971. Awards and inclusions in prestigious collections followed.

His paintings have graced the covers of numerous magazines, and he has been featured in American Artist, Wildlife Art News, Art West, Watercolor , Sports Afield, Sporting Classic, Southwest Art and Orange County Illustrated. Iin 1986, American Artist chose Mort as their "Artist of the Year".

Mort has been recognised as a "Master Artist" in the Society Of Animal Artists 2002 and has won the Robert Kuhn Award from the National Wildlife Art Museum. 2011 Art for Conservation "Medal of Excellence". Mort's interests are many and varied, and they are often reflected in his art.

American Indian history and culture hold a special allure for Mort, perhaps because he has an Mohawk Chief's daughter, Norwegian whalers & explorers among his great grandparents. Wildlife, romantic women with parasols, flowers, fisherman, cowboys, and American Indians have provided him with endless colors and shapes with which to design. Mort's work has taken top awards in many of the exhibitions he has entered including the Society of Animal Artists, the American Watercolor Society, and the National Watercolor Society.

Mort's work is represented in many collections including the Smithsonian Institution, National Gallery of Art, National Academy of Design, The Leigh Yawkey Woodson Museum Of Art, The Dunnegan Museum Of Art, The National World Museum Of Environmental Art, American Artist Magazine, Wildlife Art Magazine and many private and public collections. Mort and his wife, Terri, have three daughters: Brandalyn, Monet and Tauna, who are accomplished students and athletes.

Mort has three adult sons: Mort Jr. Who upon leaving the Navy Submarine service, chose to work and reside in North Carolina driving 18 wheelers; Eric, a graduate of Miami Of Ohio, is an Art Director for a magazine publisher in Ohio; and Scott, a graduate of UCLA in California, is an Art Director in a Senior Graphic designer living in the state of Washington. Tauna is an art student. Monet is a graduate of San Diego State University, with a BA in Psychology and is working towards her Masters.

This item is in the category "Art\Art Prints". The seller is "fasgallery" and is located in Santa Maria, California. This item can be shipped worldwide.