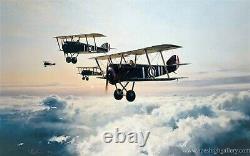 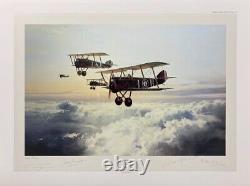 A STUNNING TRIBUTE TO THE ICONIC FIGHTER PILOTS OF WWI. Sopwith Camels of 209 Squadron RFC on an early morning patrol in April 1918. This artist proof copy is.

Hand signed by three iconic aviators including one of the pioneers of the aviation industry. Sir THOMAS'TOMMY' SOPWITH BE, Hon FRAeS. One of the true pioneers of aviation he taught himself to fly in 1910 and subsequently set a number of records. After setting up his own Flying School he began designing aircraft and formed the Sopwith Aviation Company, producing more than 18,000 WWI aircraft including the Sopwith Camel, which he designed.

He is inducted into the International Air & Space Hall of Fame at the San Diego Air & Space Museum. 1st Baron of Inchrye MC and Bar. Joining the Royal Flying Corps in 1914 he flew throughout WWI, becoming an Ace with 9 aerial victories, most of them in the Sopwith Camel, and he was awarded the Military Cross twice for conspicuous gallantry and devotion to duty on many occasions. After retiring from the RAF in 1923 he became a politician and was elected as a Conservative Member of Parliament, serving with the Air Ministry during WWII.

YOUR PIECE OF MIND: As a reputable company, if any issues do arise we don't expect our customers to deal with it. Please note: The signatures on our pieces are not reproductions; they are original autographs, hand-signed by the veterans involved. This item is in the category "Art\Art Prints". The seller is "aceshighgallery" and is located in this country: US.