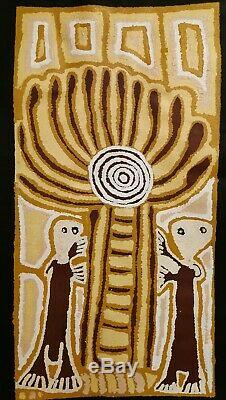 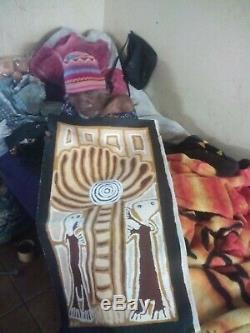 Linda's paintings are inspired by both her traditional nomadic life in the desert, and the Dreaming of her father and stepfather. Linda's father was Rintje Tjungurrayi who was he killed by a revenge spearing party in accordance with customary Law when Linda was about eighteen months old; her stepfather, artist Lungkarta Shorty Tjungurrayi, subsequently brought her up.

Before Lungkarta died in 1985, he instructed Linda to carry on his work and paint his Dreaming. And so it was that in 1986 her two Uncles Uta Uta Tjangala and Nosepeg Tjupurrula taught Linda the art of painting. Linda often paints the Dreaming story of the Tingari and the Emu Men. The Emu Men were ancestral beings that roamed the landscape during the Dreamtime or Creation Period.

The Emu was the totem of her father, Rintje Tjungurrayi and stepfather, Lungkarta Shorty Tjungurrayi. The Tingari were ancestral spirit beings, who went on very long journeys, creating much of the desert landscape in Central Australia, and instructing the people about law and custom. Linda paints country mostly around Lake Mackay, which has been central to the cultural and spiritual life of the Pintupi people for thousands of years. People used to camp around its shores during their seasonal journeys and gather there for ceremonies. Lake Mackay was where Linda was born and traveled for most of her early childhood. It is a large dry salt lake, which straddles the WA-NT border, northwest of Kintore.

As they were walking along, on of their group, the Nangkari, a highly respected medicine man and healer, and his two wives, had lagged behind a little as they approached Mt Liebig. The Nangkari, an elderly man by then, lay down and had a sleep, not seeing the windmill before he closed his eyes. His wives, however, saw it whirring around, and not knowing what it was, took off into the bush screaming.

Upon waking, the Nangkari, who had had no experience of white people, also saw the windmill with its vanes flailing in the wind and making a mighty roaring noise. He took it to be the evil spirit, Mamu. To protect his people, he started throwing spears at it, but they just bounced back.

He then used his magic powers and produced stones from his body to throw at it, but they, too, failed to stop it. Finally, noticing that the Nangkari and his wives werent among the group, Lindas step-father, Shorty Langkata Tjungurrayi, the owner of many Dreaming stories and also a magic man, walked back to find the missing trio. Shorty already had experience of white settlement and knew that windmills were machines that drew water up from the ground.

He managed to convince the Nangkari that it wasnt the Devil Devil but that it was a device that provided good water. The Nangkari, eventually pacified, drank some of the water, and satisfied that it was good, was happy, and the family group travelled on. LINDA'S KANGAROO MAN STORY Kangaroo Man was one of the ancestral spirits from the dreamtime.

These spirits had the gift of morphogenesis. They could change their shape from being amorphous and unseen to the physical shape of animals and birds. Kangaroo is a mans dreaming, and part of it forms the law describing how a kangaroo should be cooked, with fierce penalties applying to any man not following this edict. This is complied with even today, and determines all the aspects of dealing with and sharing out all parts of the kangaroo once it has been killed. Linda's step father, Shorty Lungkata Tjungarrayi, was descended from the Ancestral Kangaroo men and therefore owned many of the stories and dreamings associated with them.

Before he died in 1985, Shorty passed on many of the stories and permission to paint them to Linda. In turn, Linda will hand down this information to a young member of her own family. In this way, part of the spiritual background of Aboriginality will be preserved as a lasting testament.

Sometimes Linda paints two or more Kangaroo men. In these paintings, Linda is depicting the spirits of important and influencial men in her life. The two main ones were her father, Rinte Tjungarrayi, who was killed by a revenge spearing party when she was a baby. And her step father, Shorty Lungkata Tjungarryi, with whom her family walked out of the desert in 1945. Linda depicts them travelling across her traditional country around Lake MacKay, Western Australia with the hot Australian sun above. This information was written by Linda's husband, Russel Sim, as dictated to him by Linda as the artworks were created. The item "LINDA SYDDICK, Highly Collectable Aboriginal Art, 89 x 45cm. Witch Doctor" is in sale since Monday, February 17, 2020. This item is in the category "Art\Aboriginal\Paintings". The seller is "aboriginaldesertart" and is located in Alice Springs, NT.