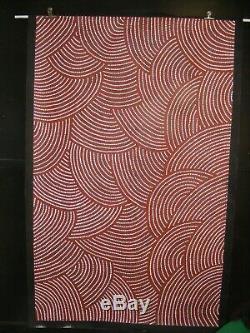 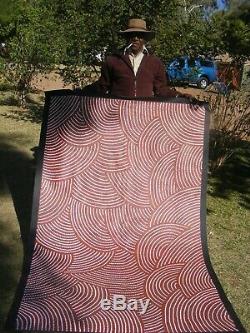 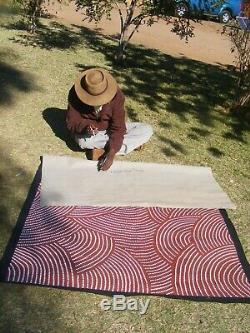 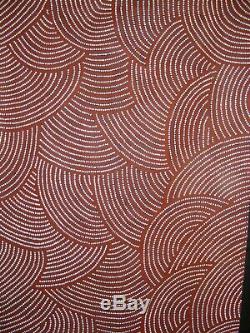 Painting also comes with COA. Michael was born around 1946 in Pikilyi, Central Australia.

Michael grew up in the bush in Haasts Bluff until his parents took him to a mission school in Yuendumu. Before he was a painter, Michael worked as a buffalo shooter in the Alligator River plains then as a truck driver and then a cattle drover. As a young boy he was taught sand, shield and line paintings by his grandfather. His country intersects numerous Dreaming paths, all of which have been passed down to him from his fathers side. Michael was 13 when he went through his first rites of initiation.

Living in Papunya with his wife Marjorie, Michael began painting in 1981. Initially Michael observed the work of older artists but by 1983 be painted regularly. His paintings include snakes, kangaroos and often depict several Dreamings including the Flying Ant and Yam Dreamings.

Michael rose to prominence when his design was used to adorn the forecourt of Australias Parliament house in Canberra. He is a master desert painter using bold designs with free flowing execution.

He is known for his depictions of several Dreamings on a single canvas and is one of Australias most famous painters. Some of his works are featured in Sydneys iconic Sydney Opera House and he has exhibited worldwide with permanent collections at the National Gallery of Australia.