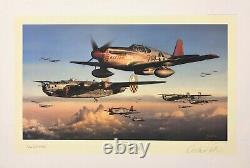 From the studio of world renowned artist John D. Shaw, a stunning tribute to the legendary Tuskegee Airmen.

SAFE PASSAGE HOME by John D Shaw. Flying his P-51C "Kitten, " Lt Charles McGee and Mustangs of the 332nd Fighter Group escort B-24s of the 459th Bomb Group as they begin the journey back to their base in Italy after a daylight bombing mission, summer 1944.

Known as the "Red Tails, " these all-black pilots gained a reputation for their unequaled record of safely protecting their bombers, often being specifically requested for this duty by the bomber crews themselves. In 1941, at the height of racial segregation in the US, a group of young, predominantly African - American men would be trained as Fighter Pilots at the Tuskegee Army Flying School in Alabama. Knowing that their example would set the stage for future generations, the Tuskegee Airmen held themselves to the highest of standards. With unyielding self determination they were forged into an elite unit of fighter pilots and their contribution eventually paved the way for racial integration in the military services.

The young pilots of what was to become famously known as the Tuskegee Airmen first went into action in Italy in May 1943. Contending with prejudice from certain quarters within the air force and much of the press, they were equipped with second-hand P-40 Warhawks and later P-47 Thunderbolts however in July 1944, they formed the 332nd Fighter Group at Ramitelli Airfield. Now equipped with P-51 Mustangs with bright red spinners and tails, they became lastingly known as the "Red Tails".

Under the strict leadership of Colonel Benjamin O. Davis, who insisted his men stay close to the bombers they were escorting, rather than pursuing enemy fighters, their dedicated task was to protect the bomber forces.. Flying until the end of hostilities over Southern Europe and eventually as far as Berlin, their record for protecting their bombers was second to none, and that iron discipline would earn the'Tuskegee Airmen' the respect of hundreds of bomber crews. One of the many units regularly escorted by the Red Tails was the 459th Bomb Group, 15th Air Force.

The Group began flying missions out of Giulia Airfield in Italy from March 1944 over most of Europe, including France, Yugoslavia, Hungary, Germany and Greece. Flying almost 200 combat missions, the 459th successfully attacked numerous targets including oil refineries, railroads, heavy industry, communication lines and bridges. The unit was awarded the Distinguished Unit Citation for its daring raid against airfields in Bad Voslau on April 23rd, 1944, hitting the target despite a barrage of flak and enemy fighters. This powerful piece by one of the world's most accomplished and widely collected Aviation Artists, John Shaw, is released as a lasting tribute to the Tuskegee Airmen and the brave bomber crews who endured those grueling missions in the skies over occupied Europe during WWII.

The print is individually numbered and personally signed by the artist along with two highly distinguished veterans who were involved in the scene depicted in John Shaw's painting. He joined the 332nd Fighter Group in Italy in December 1943 and flew his Mustang'Kitten' on missions in North Africa, Italy and Germany, scoring his first victory whilst escorting bombers on the Ploesti raid of 24 August, and finishing the war with three in total. After the war he flew in combat in Korea and Vietnam. Serving in the Air Force for 30 years, he holds the record of flying more combat missions than any other USAF pilot in history and is the only known fighter pilot to fly 100 or more combat missions in WWII, Korea and Vietnam. His many awards for service and valor include the Legion of Merit, DFC with two clusters, Bronze Star and Légion d'Honneur. In 2011, he was inducted into the National Aviation Hall of Fame. In June 1942 he joined the 756th Squadron, 459th Bomb Group, as the tail gunner on B-24's, flying from Creganola, Italy. On his 3rd mission whilst attacking the Ploesti Oil Fields, his aircraft was hit by flak and forced to ditch in the Adriatic Sea. Four of the nine crew were lost and Corliss was the only survivor from the rear of the bomber. Now flying on the B-24'Cherokee Maiden' he completed 39 combat missions participating in some of the most dangerous operations of WWII, including missions to Ploesti plus multiple trips to Budapest, Vienna, and Blechhammer. His many citations include the Purple Heart and Air Medal with 3 oak clusters. This powerful piece is one of only 250 copies that were produced worldwide and is proving to be extremely popular so this is a great opportunity to acquire a historic collectors item while it's still available. Please ask for details about our framing service.

Matted & framed pieces are'flat packed' in substantial packaging. YOUR PIECE OF MIND: As a reputable company, if any issues do arise we don't expect our customers to deal with it.

Please note: The signatures on our pieces are not reproductions; they are original autographs, hand-signed by the veterans involved. This item is in the category "Art\Art Prints".

The seller is "aceshighgallery" and is located in this country: US. This item can be shipped worldwide.